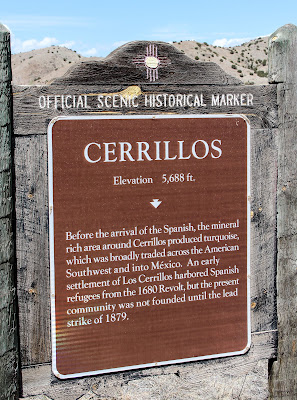 Cerrillos, New Mexico, just 25 miles from Santa Fe, is a delightful destination if you
want to  capture an old mining town with your camera. A few folks live here, but this former boom town  has been officially labeled a 'Ghost Town."  In its heyday, during the mid-1800's, there were 3,000 prospectors working the surrounding hills  extracting gold, silver, lead, zinc, and turquoise. There were 21 saloons, 5 brothels, 4 hotels, and several newspapers. Cerrillos was so prosperous  it made the short list for becoming the capital of New Mexico.

But after the mineral boom peaked in the late 1800s, the mines shut down and coal took over as the mainstay of the economy. The prospectors scattered and  the population dwindled. Today the main street   looks like an abandoned western movie set, with the exception of the charming St. Joseph's church which still offers Sunday mass. 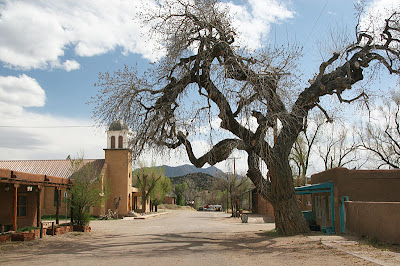 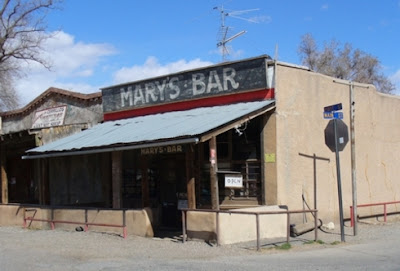 Indeed, I expected John Wayne to come riding down this tree-shaded street any minute. Well, back in 1972  a John Wayne movie  - The Cowboys - was filmed just outside of town and   12 other movies, including Young Guns and Young Guns 11, have been filmed here as well. But for me, the lure of Cerrillos is in the unexpected vignettes waiting to be photographed. 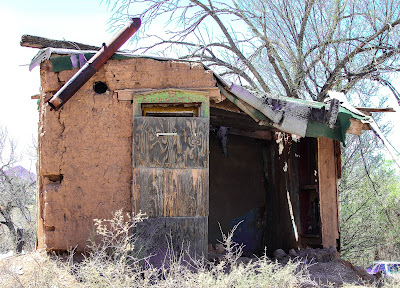 A woebegone house with a 'FOR SALE' sign caught my eye. 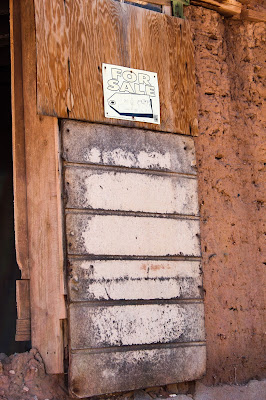 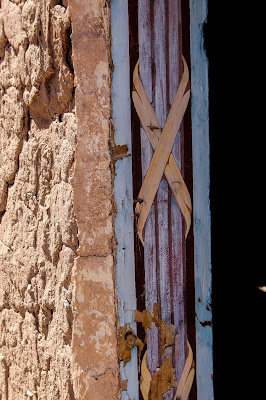 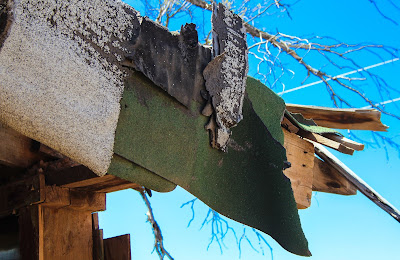 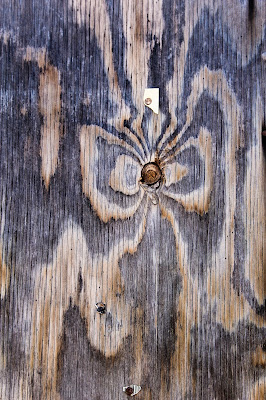 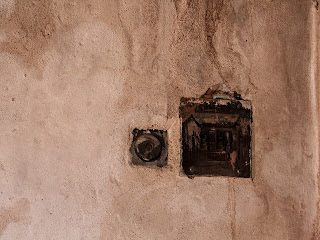 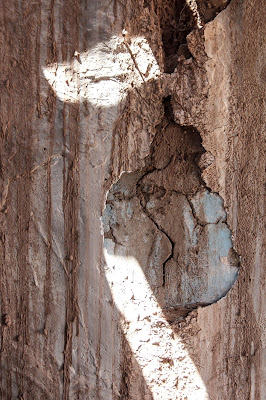 And then, just down the road... 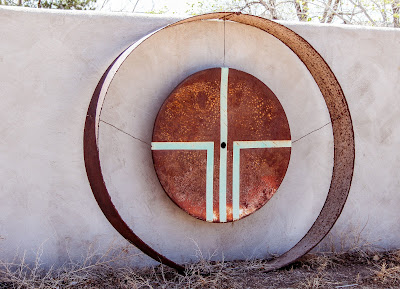 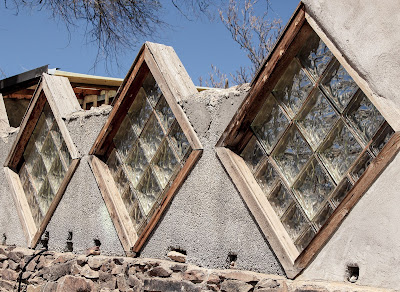 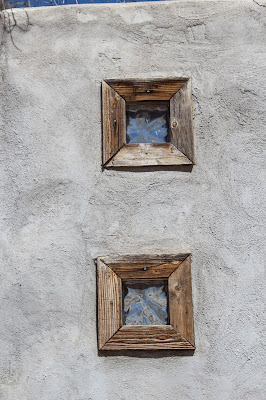 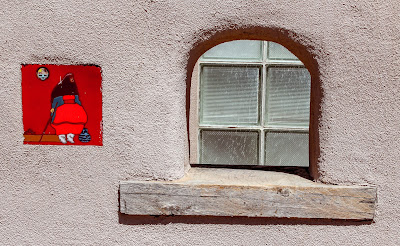 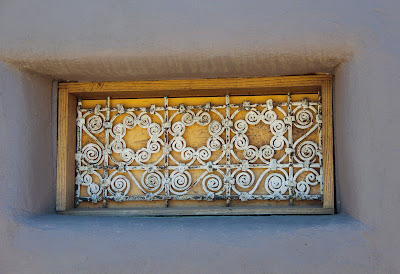 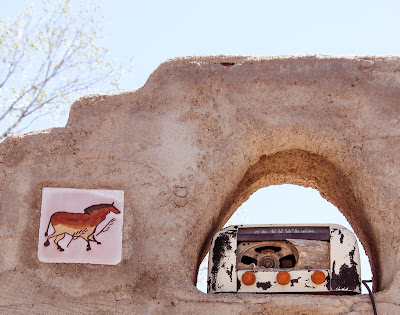 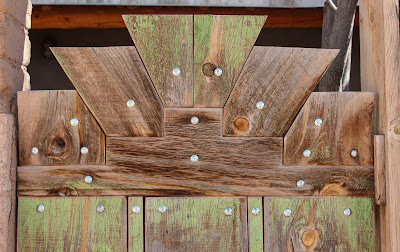 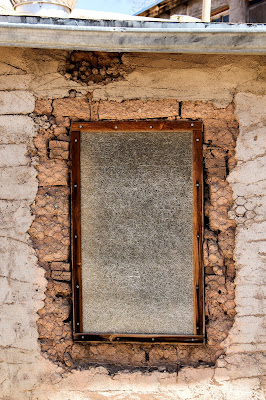 The Cerrillos Turquoise Mining Museum (admission required) has a wonderful hodgepodge of American old west and mining memorabilia. Photography is not permitted so I 'shot' some wonderful old bottles outside through the window, capturing the reflection of some of the old mining equipment displayed in front of the museum. 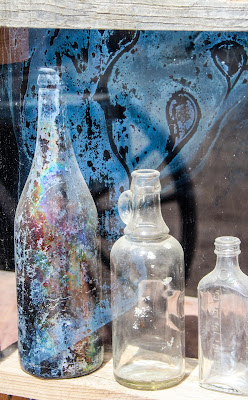 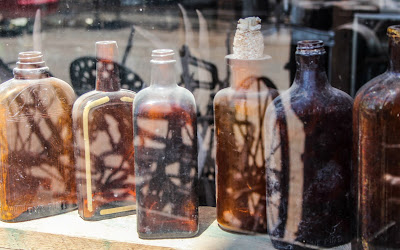 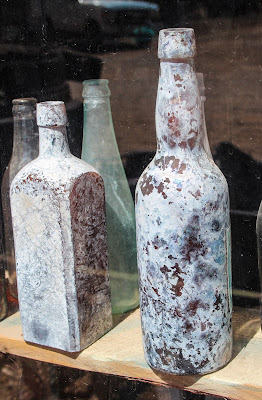 From one of the 21 defunct saloons? 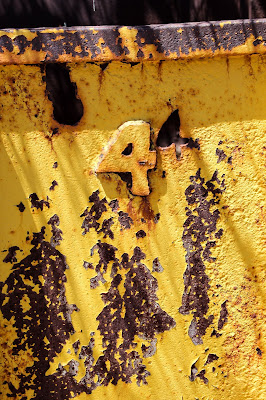 Just next to the museum is a sweet petting zoo - buy a bag of feed inside the Trading Post attached to the museum. There's an antique shop a few streets over... 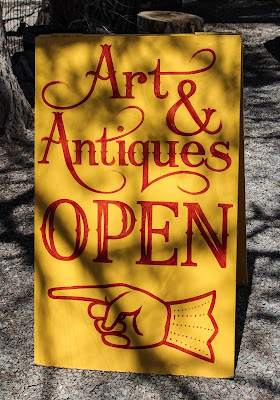 Broken Saddle riding stable is down the road a bit, and the Cerrillos Hills State Park has 5 miles of hiking trails.  But, if you're hungry, I suggest a short drive to Madrid, NM where you just might find this to top off your day! 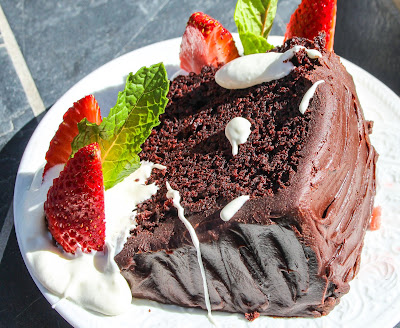 And I couldn't resist taking a shot of our colorful waiter's belt buckle and nifty tattoos! 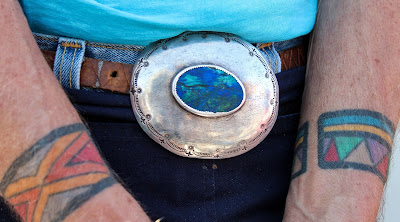 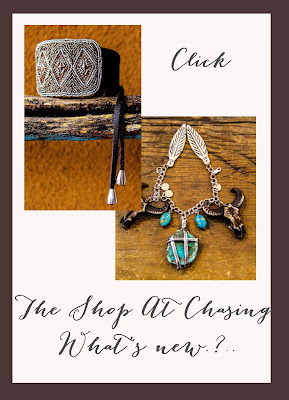