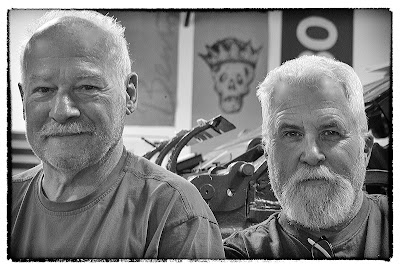 The simplicity of the sign on the door to Landfall Press belies the visual wonders that are ensconced in the 7,000 sq. foot space that houses this unique and prolific printing/publishing house. 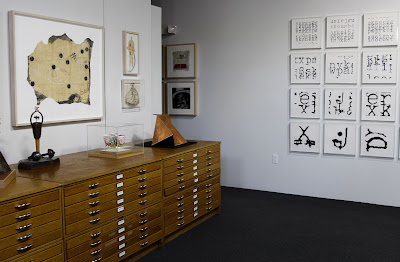 The first room/office showcases work by some of Landfall's collaborative artists. 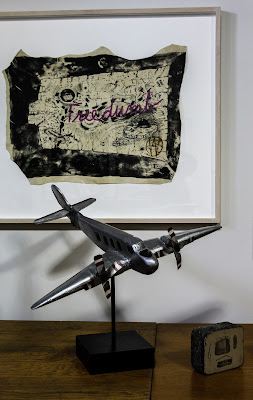 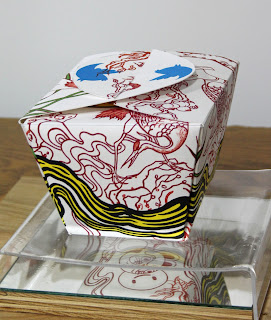 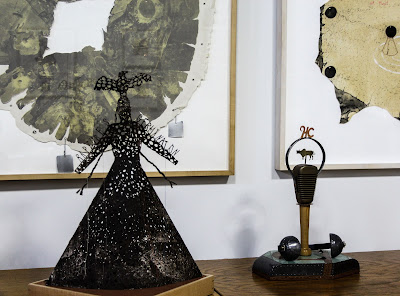 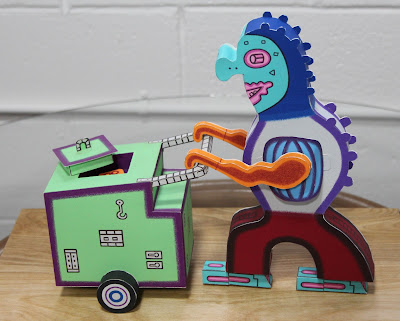 The next rooms - which are vast with soaring ceilings - hold the lifeblood of Landfall's printing empire - five massive presses that  produce lithographs, etchings and wood block prints. 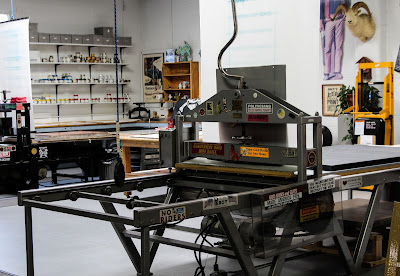 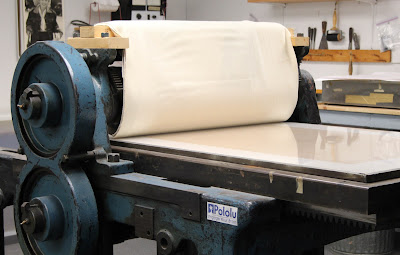 They stand like giant sculpture, waiting for ink and paper to be transformed into limited edition prints,  books, and 3-D objects. The newest press is  the oldest, a 150-year-old, self-inking Marinoni  Voirin lithography press that once graced a printing shop in Paris. It was  originally steam-driven, says Jack Lemon, but was electrified and in the 70's found its way to a shop in New York. 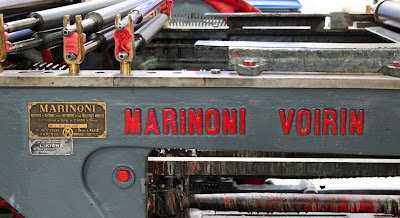 Last year the 8-ton press was loaded onto a flat-bed truck, brought to Santa Fe and installed by an Albuquerque company. It prints beautifully, says Lemon, but it takes 3 people to make it happen. Steve runs the ink in the front, Jack feeds the paper, and their press assistant, Ann Booth, gently takes the finished sheets off. It takes about 40 minutes to run 125 prints.
﻿ 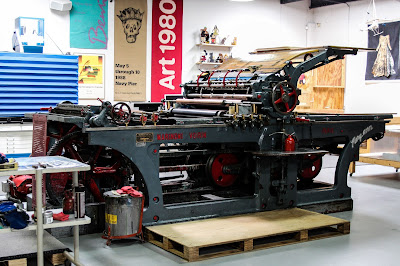 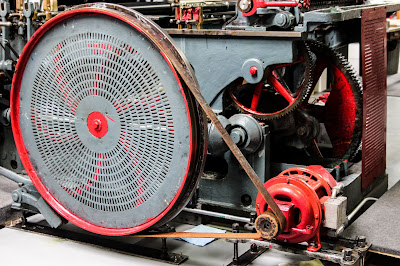 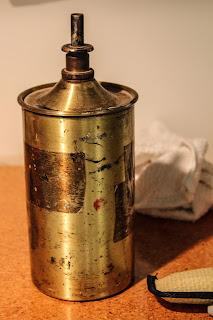 But the handsome presses are not the only visual treat in these vast rooms. Jack Lemon is an avid collector and walls, shelves and just about every surface hosts vintage posters, photographs, folk art, and wonderful, nostalgic memorabilia. John Wayne takes center stage. 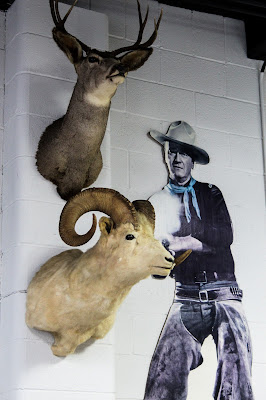 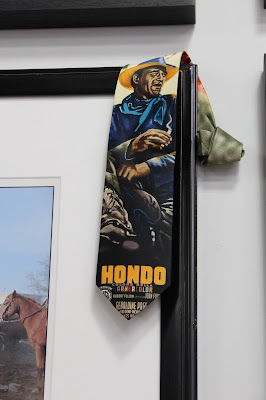 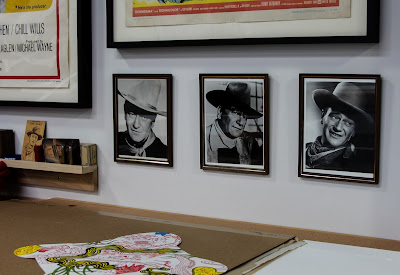 When I visited the shop, Jack and Steven were in the middle of running a lithography print through one of the five presses. After each pass the plate was re-inked in a different color,  the  excess  rubbed off with cheesecloth. 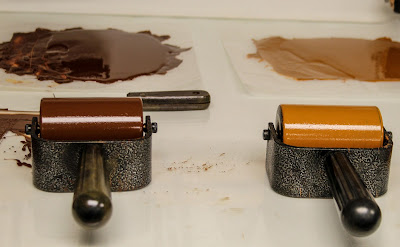 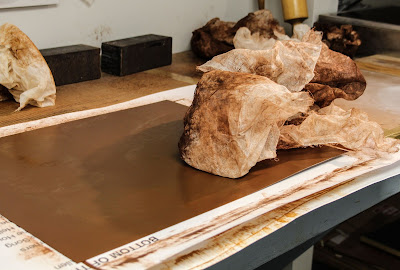 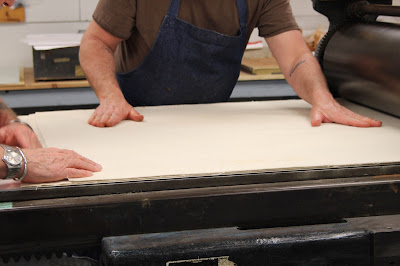 Creating the beautiful prints takes four hands and Jack and Steven - who has been with Landfall for 25-years - work in tandem like  wonderfully-choreographed dancers. 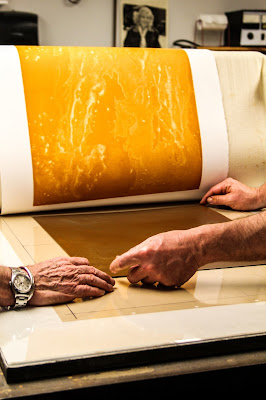 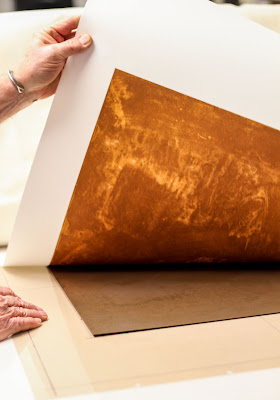 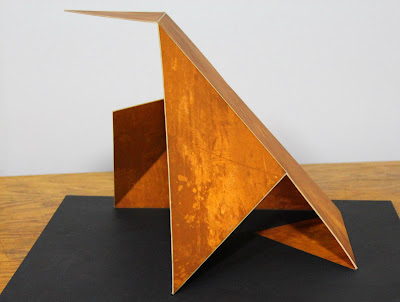 And at first glance, this lacy sculpture below looks like metal, but it's paper that was printed,  laser cut and assembled. 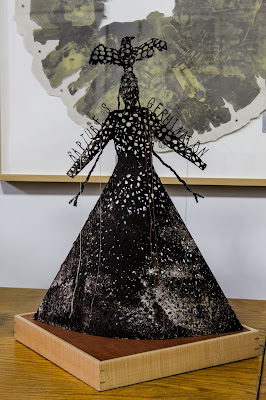 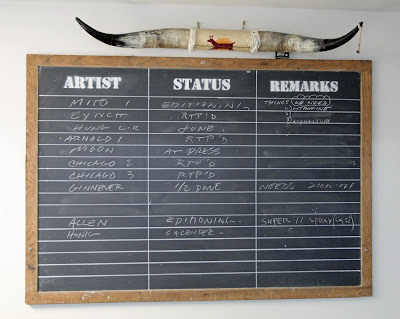 Each year Landfall Press invites a select number of artist to come to Santa Fe and collaborate on producing limited-edition print portfolios and books. The list of past and current artists is impressive to say the least - among them are Judy Chicago, Christo, Jim Dine, Robert Arenson, Vernon Fisher, Luis Jimenez,  and Santa Fe's Terry Allen. They literally bring their ideas and hunker down and begin sketching directly on a copper plate, says Lemon. "Judy Chicago was here last year.  She checked and corrected each color personally until she signed off on the finished proof." 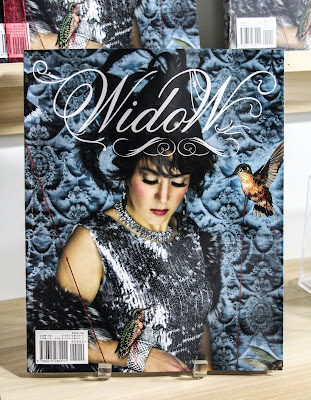 Peregrine Hornig has been working with Landfall Press for more than a decade. Their latest collaboration produced a glossy, one-volume fashion magazine - WIDOW - rather than a traditional portfolio. Since Hornig's work  challenges issues of beauty and social hierarchies, this creative format seemed the perfect vehicle. 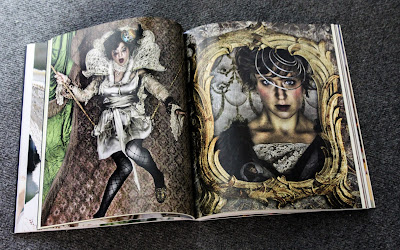 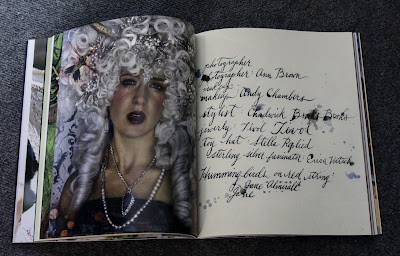 So how does Landfall Press market these beauties? "We take them on the road," says Lemon. "It's like a one-night Tupperware show. We make appointments with collectors and museums and literally show them the new work."  Their books and portfolios, says Lemon, are in almost every museum in the country as well as Europe. 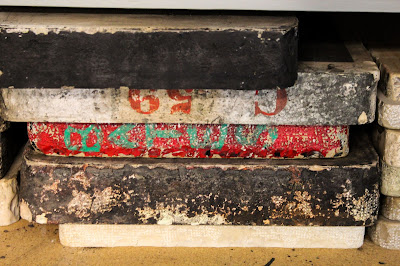